In nuclear reactors, energy is generated by splitting atoms of a fissile radionuclide. Fissile means that it can undergo fission, which is the nuclear reaction that powers nuclear reactors. A radionuclide is an unstable isotope of an element. This energy is used to heat a coolant, which is then used to run a turbine. There are a multitude of different reactor designs that each use different types of coolants and different types of fuel; however, the general parts of a reactor stay mostly the same. The parts of a nuclear reactor are as follows: the core, coolant, turbines, and containment. The fuel is located in the core, and this is  where the energy generation occurs. Depending on the type of nuclear reactor and the desired power output, the size and composition of the core can differ significantly. There are a few things that have to stay constant. The core must contain a critical mass of fissile material, and it must create enough heat through fission such that it can drive the turbines attached to it. The core must have some type of coolant or it will overheat, and a pressure differential must be created across a set of turbines in order to generate electricity.

In a pressurized water reactor, uranium oxide is the fuel of choice. It is used in the form of cylindrical pellets containing 3-5% U235 (Glaser 2005), with the rest of the uranium in the form of U238. These pellets are then packed into tubes made of the metal zircaloy, which is an alloy of zirconium chosen for its corrosion resistance and low neutron absorption (Forty, 2000). A large reactor contains around 75000 of these rods, totalling around 100 tonnes of uranium (Glasstone, 1994). Pressurized water is passed over these rods, acting as both a coolant and a neutron moderator. The water is pressurized so that it remains liquid at the high temperatures in the core of the nuclear reactor, and its liquidity is what allows it to act as a neutron moderator. The pressurized water is then passed next to water at a lower pressure in a heat exchanger. The less pressurized water is boiled into steam, which is used to drive a turbine to generate electricity.

Boiling water reactors are the second most common type of reactor after the PWR. They share many similar systems, but also have significant differences. Both reactors use light water as coolant. Light water is water that has not been enriched with its deuterated form. It is called light water because its mass per molecule is less than the mass per molecule of partially or fully deuterated water. BWRs also use similar fuel to run, although they can run on uranium with a slightly lower enrichment (Nuclear Reactor Types, 2005). BWRs usually contain more uranium, are larger, but operate at lower temperatures so their power output is around the same (Dingman). BWRs usually contain 140 tonnes of uranium, which is around 40 tonnes more than in the typical PWR. BWRs also operate at lower pressures than PWRs because the coolant water is allowed to boil as it passes by the fuel rods. Another difference is that the steam generated from the boiling water in the reactor is what is sent to the generator (Dingman).

Issues with PWR and BWR:

Both reactors have similar modes of failure. In the event of a loss of coolant, the cores of the reactors will overheat. This leads to the creation of very high pressures as any coolant that comes in contact with the fuel rods will be vaporized. The zirconium cladding on the fuel rods can cause the catalytic breakdown of steam into hydrogen and oxygen leading to the possibility of a hydrogen explosions during meltdown. If pressure is vented or an explosion occurs, this can lead to the release of radionuclides into the environment, similar to the circumstances at Chernobyl, Three Mile Island, or Fukushima. In the event of complete loss of coolant, the fuel rods may heat up to such a degree that they melt and flow through piping to different parts of the nuclear plant. This makes cleanup difficult and dangerous as it is not known where the extraordinarily radioactive remnants of the core will be.

Another downside of PWRs and BWRs is that they do not extract much of the energy available from the fuel. In fact, “spent” nuclear fuel contains 96% reusable nuclear material (Fuel Consumption). The reason that more of of the fuel is not used is that the neutron flux inside conventional nuclear reactors is not high enough. Sufficient neutron flux would convert U238, the main component of nuclear fuel, into Pu239, one of the fissile materials that actually produces energy, at a rate faster than the Pu239 is consumed (Zheng, 2014). Low neutron flux means the amount of fissile material in the core of a nuclear reactor decreases over time, and fuel rods must be replaced every 12-18 months. Replacing fuel rods is a difficult procedure that produces large amounts of high-level radioactive waste. 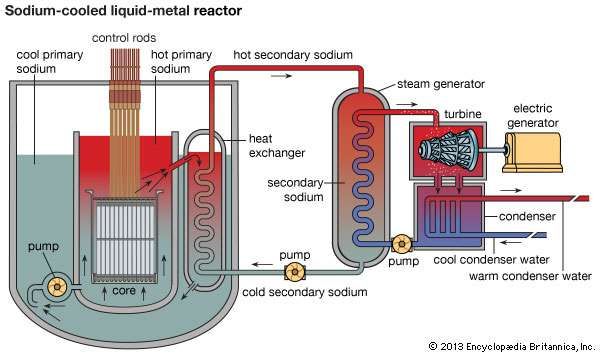 A fast breeder reactor is a reactor that has a very high neutron flux such that it can convert either thorium-242 or uranium-238 into fissile fuels. Theoretically this could allow for nearly 100% energy extraction (Zheng, 2014). It also means that the dangerously radioactive transuranic elements present in normal nuclear waste are consumed, leading to a reduction in both the volume of radioactive waste as well as the half life of that waste. High neutron fluxes in the core of the reactors are achieved through the use of various fuel geometries and the lack of a moderator (Sofu, 2015). This means that temperatures in the cores of FBRs are high and a strong coolant is needed, such as molten sodium or molten lead (Garwin, 2010). There have been a number of FBRs constructed, some of which are still operational. A couple of examples of operational reactors are the BN-800 in Russia, the FBTR in india and the Joyo reactor in japan. All of the current FBR reactors are experimental reactors; however, China and Russia have plans to build commercial scale fast reactors in the mid to late 2020s (World Nuclear, 2017).

Molten salt reactors are so called because they contain a liquid fuel in which fissile material is dissolved. Most commonly the liquid in the reactors is a molten salt of lithium, beryllium and fluorine, in which UF4 or ThF4 is dissolved. Because the salt must be kept molten, the reactors operate at a temperature above 500 C, similar to FBRs, although for different reasons (World Nuclear, 2017). One of the advantages of molten salt reactors is the fact that they don’t need to be pressurized because the vapor pressure of the molten salt is low, so there is no need to keep it from vaporizing. This makes the operation of the reactor safer, and the likelihood of a serious incident low. Another feature of molten salt reactors which increases their safety is the inclusion of a drain in the design. This drain takes the form of a salt plug which is actively cooled. If the reactor loses power, the plug will melt and allow to fuel to drain into a storage tank which is designed to passively cool the fuel without the need for electricity (Forsberg, 2006). Two different molten salt reactors have been built, both at oak ridge national lab. There are no MRSs which are currently functional, however; a number of startups have begun working on designs for MSRs (World Nuclear, 2017).

Glaser, A. (2005). About the Enrichment Limit for Research Reactor Conversion : Why 20% ? In The 27th International Meeting on Reduced Enrichment for Research and Test Reactors(pp. 1-12). IL: Argonne National Laboratory.